Warm up:
Apex had a big turnout for the early races this week. It was great to warm up with teammates. The course was fast and soft from overnight/morning rain. There were two sections where you could big ring it, awesome!


Race #1 - 9:20AM Cat4 35+ 30 minutes:
I got my typically sweet starting spot in the 6th row, solid! First lap went by OK but I noticed quickly the 35psi in my front tire was to much. I was having a hard time keeping the front tires from sliding in most corners. When I descended into "Randy's crack" on lap 2 I totally washed out the front and went down on the pavement.

An ode to Randy's Crack by a hilarious teammate who's name will remain a mystery.
One feature that was only barely mentioned in previous Magnuson reports was ‘Randy’s Crack’. Of course when guys are traumatized by something, they are reluctant to discuss it. This is understandable because many a good man went down hard in Randy’s Crack on Saturday.
Randy’s Crack, as you might recall, was adjacent to the restroom area. And let me start by saying that Randy’s Crack is a terrible place to bite it.
Early in the morning, after a long wet night, Randy’s Crack was very slippery, you might even say slimy, not to mention tight and treacherous with a manhole right in the middle — so guys were hesitant to just charge right in, although clearly the temptation was there. The question was, do you ease slowly into Randy’s Crack, or just charge in hard and hope for enough friction to see you through? Indeed, do you circle wide around Randy’s Crack or do you just dive in tight?
Well, even though Randy’s Crack had dried up a little and gotten a bit stickier later in the morning, both Don and Travis dumped it in Randy’s Crack and came out dirty and battered. Even Connell went down hard in Randy’s Crack and emerged a little sore.
Somehow Jason defied has natural inclination to come too quickly into Randy’s Crack. Instead he eased in gently and kept his shorts clean and his dignity intact. Bill the Drill, not surprisingly, drilled Randy’s Crack repeatedly with great aplomb. Each man handled Randy’s Crack in a different manner.
In the end, Randy’s Crack was the undoing of many men. I can speak for everyone when I say that we hope to never see the likes of Randy’s Crack again!

The crash  took some spunk out of me for sure. I picked up a few spots on the last couple laps and rolled in 15th.


Race #2 - 9:20AM Cat4 40 minutes:
This old dog learned a thing or two from the previous races start. I queued up on the left side of the road with Chris and Travis prior to the call ups. Once the first row was called up we were in prime position to to slip into the 2nd row, my best start position of the year! I got off to a pretty good start, maybe 10-12 back. It was really cool to have the leaders in sight after the opening straightaway for once. I was down to 30psi in the front tire, that combined with my knowledge from the 1st race I was picking pretty good lines. My only big mistake of the race was overcooking a downhill right hand turn off the gravel road and onto the pavement of the finishing stretch. This was with 2 laps to go, it totally sucked because while I was at a stand still in the bushes the guys I had just passed on the uphill stretch were getting away. I clawed back past a couple guys and on the final lap bridged up to a UW rider and my teammate Chris. Our teammates were great at yelling out our positions every lap, Chris and I both knew we were fighting for top 10's. The UW kid had just been sitting on Chris on the straightaways, shortly after I joined the group he attacked. I thought we might be able to work together to bring him back but no luck, Chris and I rolled in 6th and 7th. 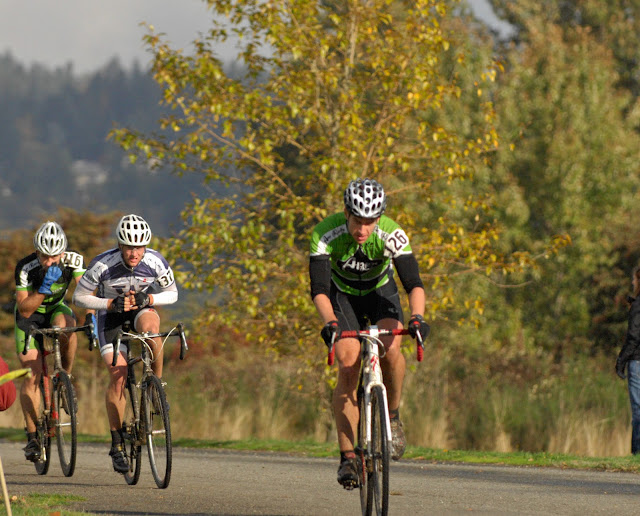 This was my favorite weekend of CX racing so far. Great course, great weather, and lots of teammates out cheering and participating.