First things first, I raced today and... wait for it...I finished both races with the wheels I started with, Hellz Yeah! Turns out if you don't run the last 10 minutes of a race you'll place higher, weird.

Race #1 - 9:20AM Cat4 35+ 30 minutes:
I hate to start a race with a poor attitude but that's what I was bringing to the table today. No coffee, moderate hangover, flat course, 8th row start, all bad signs for me. Well, fuck it, I'm here and it's time to party! 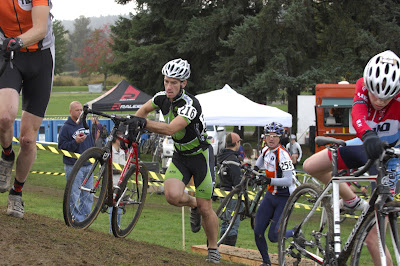 The start went pretty smooth and once I got going I was picking riders off quickly. Nothing of note for most of the race other then it was slippery out there.With 1/2 a lap to go I was closing in on a couple riders who had been called up. Huh, maybe I'm closer to the front then I thought. With a couple hundred meters to go I got past Randy from Byrne, I nipped one other rider at the line in a full sprint. The final effort turned out to be worth it, I took 10th place out of 80 starters. 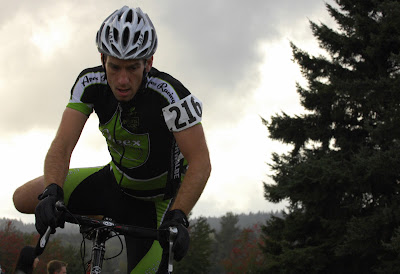 Race #2 - 10:30AM Cat4 40 minutes:
I was lucky enough to get a pretty good starting spot in the 3rd or 4th row for the 2nd race. For one reason or another (bad start position or mechanical issue) I have yet to be in contact with the leaders of any CX race this season. Surprisingly it happened in race #2 today. I was maybe 20 or so back going into the first corner, a lot of the usual suspects were up front. After a couple laps I had moved up to about 10th and caught onto the back of a group of 4 racers. A couple Farestart guys and Evan and strong Jr. rider were in the group. I lost contact after plowing into a stake after over cooking a corner, no harm done but now I was 10-15 seconds down again. I was back in contact near the finish of the 3rd lap when a Starbucks rider I was lapping ate shit right in front of me. FAIL, down I go, again nothing major but there went another 15 seconds or more.
I regained contact with Evan after a bit, he would sneak away in the corners and I would real him in on the power sections. Late in the 4th lap he took a spill and I moved past him. the 5th lap I was alone, no one close behind me and no carrot close enough to chase. My Teammate Chris made a big push on the final lap and moved up several spots, we ended up finishing 11th and 12th in a big field. 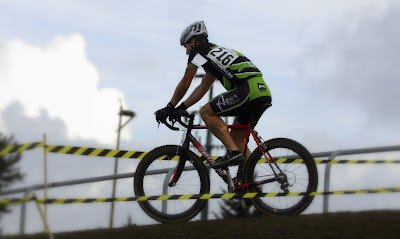 Great day over all! 10th and 11th in back to back races made for an awesome morning. I was able to hang out after the races and cheer on teammates for a few hours, great fun! The MFG point system doesn't seem as stupid as Seattle Cyclocross, maybe I'll get a call up next week!
Posted by Jason Connell at 9:07 PM

Grats on a mechanical free race!

What are the differences in the points systems?

Hey Jason,
In the Seattle series points go 60 deep, it's retarded. So I missed the 1st race of the year, finished 8th in the 2nd but was ranked 29th overall. Somebody who "nailed" a couple 30th place finishes is ranked higher, silly.