Race #1 – 9:30AM Cat4 35+
I got a great staring spot in second row, no excuses, lets roll! Well, not an excuse but my start sucked ass! I was a little tentative sprinting downhill and then got caught behind a crash in the first turn. I was probably back in 20th or so coming out of the first turn. I love this course, not very technical and suited to a power rider like me. Near the end of the first lap I had moved up to 7th or so, the leaders were in sight. As I entered a quick left-right –left section I over cooked the second turn and went off course. SHIT! Only cost me a few seconds but this wouldn't be my only slip up. This same section got me nearly every lap! Over the next few laps it was the same story, I would latch on to the front group only to fall back after riding off course. In the end I finished 5th (out of 99) 26 seconds back of the winner, only a second behind 4th place and 20 seconds ahead of 6th.

Getting out of the finishing shoot took forever. I was anxious because I only had a few minutes to swap numbers get a drink and line up for the next race. By the time I got all this done the starting chute was packed full of riders. 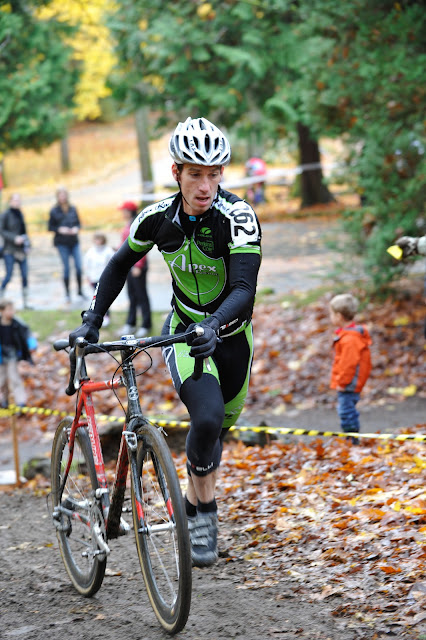 Race #2 – 10:20AM Cat4
I was looking forward to this race since the top 16 riders in the series get "called up" into the first 2 rows. Call ups are based on series points, since I missed a couple early races in the series this would be my 1st call up. Well, by the time I was ready to line up the call ups had already happened. I decided screw it and basically jumped the queue and slid in to the 4th row, I politely told the guy next to me I missed my call up and I was going to start here.  I had a much better start this race and was probably in the top 20 going into the first turn.  After the 1st lap things started to thin out a bit. I had moved into the top 10 and finally made it cleanly through the section that killed me in the 1st race.  Most of the race I was really in no man’s land. I had pulled away from the field but was 10-20 seconds behind the 5 leaders. With a lap and a half to go I caught the kid from UW that beat me out a Magnuson Park earlier in the season. He had some type of issue at the stairs and I was able to slip away. I ended up finishing with no one around me in 5th place (out of 117).  I felt great getting back to back top 5’s!
Race #3 – 1:20PM Cat3
After freezing my ass off for a couple hours I got in a little warm up and headed towards the start line. Two teammates Jason and Bill got call ups and were in the first couple rows. I was happy to start in the back with another teammate Ed and stay the hell out of peoples way. To say my legs were blasted already would be an understatement. I did 2 races at all the previous MFG races but this was my first time going for 3! At check-in I was told I was the only racer all season that did 3 races in one day, pretty cool I guess. I had zero legs left but the one thing I did have going for me was I knew the fastest lines to take. It would have been interesting to have a power meter and see how much my power had fallen off by the 3rd race. On the uphill gravel section I was big ringing it the first two races and now I was barely getting up it in my lowest gear. Anyway, I finished right in the middle of the pack - 28th out of 54. Considering the higher level of competition and it was my 3rd race of the day I was pretty happy.
Two top 5's in such big fields is a big confidence booster for me going forward in Cross. I learned a lot this season and should be a lot more dialed in next year racing with the Cat 3's.
Posted by Jason Connell at 9:29 PM