As you can see in the picture to the left I had another tubular issue this week. More about that later.
Silver Lake was a hard course, no two ways about it. Lots of sand and very little time to recover. It took a couple warm up laps before I got at all comfortable riding through the sand. It was hard for me to judge how fast to "hit" the sand sections. Gradually it dawned on me that the best approached was faster the better!

The Start - I asked the USA Cycling official if call ups were based on last weeks results or season standings. I didn't get the answer I was looking for, season standings it was. Even though I finished 8th the previous week I missed the 1st race of the season so I was ranked 29th, no call up for me. Call ups are critical in cyclocross because it allows faster riders to position themselves in the first few rows. Fitness levels in cross races vary so much that a mid pack start can trap you behind much slower riders. We had 87 riders in my field (Cat4 35+) I started in the middle of the field, maybe 40th or so. Within a 100 yards of the start line the course transitions from pavement to sand. I fully expected to get caught up behind a shit storm of riders going down in the sand. True to form some guys in the second row went down and by the time I even reached the sand I had to dismount and run around guys on the ground. I remounted and pushed through the beach section about 2/3rds of the way before again getting caught behind fallen riders. The remainder of the first lap was spent trying to pass riders that were already gassed. The second lap I tried running across the beach section. now I'm a "runner" but this was a mistake, it was hard as hell and not particularly fast. The 3rd lap I got into a pretty nice groove and slid by quite a few riders.
Starting the 4th lap I felt strong and powered through first sand sections. I had already passed my motofish "friend" from last week (who had the benefit of a call up) and was closing in on one of his teammates. I got passed him on a small uphill section but he stayed right on my wheel over the next minute or two. On the final mini climb I was determined to crush his soul and give myself a cushion leading into the finish. Well I was crushing, John Alving (a teammate who races 1/2's) was yelling at me, I was pooped but fired up. As the course transitioned from pavement to to dirt around a small turn I jumped out of the saddle and... FAIL. I knew it right away, I rolled my back tire off the rim. No need to get down about it, I tossed the bike over my shoulder and started running. Roughly 1/2 a mile to the finish. It stung to get passed by 15 riders or more that I had passed along the way but I'm proud of my 26th place finish.

Before my training class at HSP last night I was chatting up Thomas the master bike tech about CX gluing techniques. Four coats of glue was his recommendation. I have some gluing to do this week! 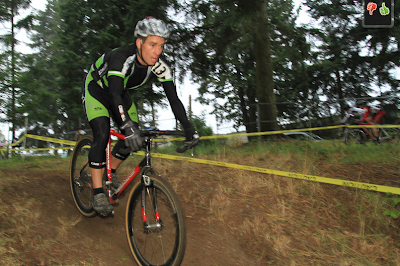 Posted by Jason Connell at 9:13 PM

Sounds like you were having a great time up till the tire rolled. Good luck getting that tech issue sorted out. Podium shot incoming?!