I accomplished my primary goal of not crashing and finishing in the main pack. I started with the CAT5 men that left Ravensdale park at 9:30am. The starter told us the first mile was a rolling neutral start but it turned out to be closer to 3 miles. I can’t complain about the slow start though, the easy pace helped me relax a little bit.

The race got going in the 5th mile, it was interesting that the pace would pick up and slack rapidly w/o much rime or reason. 7 or 8 miles in I moved up near the front of the pack for a while, never actually taking the lead though. From roughly mile 10 to 16 I hung out at the back of the pack with a guy from recycled cycles.

For several miles there was a solo rider leading the pack by several hundred yards, at some point before mile 20 he was joined by a second rider. The pack didn’t seem too concerned by this, I guess because they were in sight and not that far up the road. Mile 21! I got tired of hitting the brakes at one point so I decided to hit the gas! The right shoulder was open and well paved, I shot forward from the back of the pack. As I was passing the leaders in the pack the bikesale guys (a team that had 5 riders in the pack) yelled “break up the right side”. This made me puff up a little and I really hammered it as I went off the front, my HR hit 187bpm! I stayed away for 2-3 miles on my own. I got within 25yrds at one point of the 2 leaders but couldn’t close down the final gap. The bikesale guys gave me props for the “nice attack” as the pack gobbled me up. I actually had a tough time slipping back into the pack and ended up jumping on at the back, 3rd to last in less than a minute. The 2 riders in the break away were caught right after me. The pace had picked up a bit and I had to fight to not get dropped for the next ½ mile.

As the race turned on to Kent/Kangley around mile 28 the pace really picked up. I was near the lead of the pack or actually leading from mile 28-30. The course takes a sharp left on to the Cumberland/Kanasket RD at the start of mile 31. I was leading at this point and gave myself a good scare entering the turn at over 35mph! I scouted the course yesterday and thought the race finished at Ravensdale park sooo that sharp turn and the climb that followed were a surprise. Right from the start of the hill I started getting passed. When we crested the hill I was still near the front (10th or so) I was starting to catch my breath when I saw the 200M sign. CRAP, it was on and I was not prepared for it. My “master plan” was to launch an attack in the last mile so I wouldn’t be caught in a sprint, heck, I don’t even know how to sprint. Long story short I hammered it the best I could, passed a couple guys and got passed by a couple others.

End result I was 13 out of 29 finishers, just a few seconds behind 1st. I learned a lot and plan on racing again in a couple weeks! 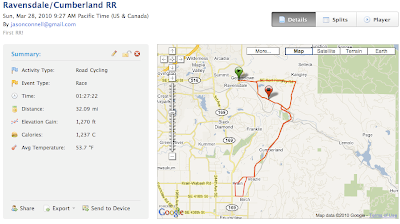 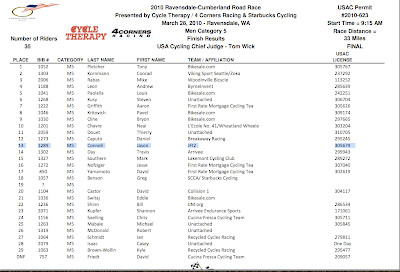 I recognize your bike from the race. I was the late addition to the breakaway and thinking the same thing you probably were- the downhill pace is annoying so I'm going for it even if the break doesnt go anywhere because I can't stand riding the brakes down another hill!

You should post your video if not already for the start of the race as everyone looked great riding off the start. It was an exciting race to the end as quickly as I tried to get the video working, I definitely did not capture the speed that everyone was going as you guys zoomed by with what looked like ease.