Today was my 20th bicycle race since March 6th and sadly this is my 1st blog entry. Come to think of it I'm behind at least 2 ironman races, 2 70.3 IM races, and a bunch of other crap. I'll get caught up on that soon I'm sure :-)

Last week at Vance Creek we enjoyed dry sunny conditions, the same could not be said for today. The Cat4 race didn't start until 11:09, it was great to be able to sleep in a bit and "enjoy" slightly warmer weather then the morning starters. Today we were racing 5 laps at about 9 miles per lap. Pretty standard stuff, nothing really significant about today's course, one little hill and a couple small rollers but that's about it. At either the end of the first or second lap there was a crash in a corner, I was a couple wheels back and managed to swing wide to avoid it. I had to chase a bit to catch back on to the pack but it wasn't too serious. The rain and wet roads were awful, today was a day to stay on your toes. On the third lap I was about 4-5 rows from the front when I saw my teammate Travis off the front with 2 other riders, Jed and Jason. Jason has won nearly every race he's entered this year, Jed is very strong, and Travis is a beast. I knew if the pack didn't close them down soon that this was a breakaway that would stick, they had some serious horsepower. At the beginning of the 4th lap I moved up to my teammate Chad who was near the front. He was sitting behind 4/5 Byrne (another team) riders who were working at the front to bring the break back. I respect that they were trying but either they didn't have the legs or the heart to really do much. The race official gave us a 1 minute to the break time check around this time, I knew the worst Cycle U (my team) would finish today was 3rd, the break was going to stick. One final note on the break. Bikesale is a team that had 11 riders in the field and they made absolutely no effort to pull the breakaway back. I was truly embarrassed for them, not to even try was pathetic.

Back to me, it is my blog after all, even if I only update it once a year! Since I had Travis up the road I was able to just sit in the pack and take up space till the end. At the start of the final lap I moved back up near the front with Chad. Chad is fantastic at moving through the pack, I stayed stuck to his wheel the rest of the lap. Inside the last mile Chad was in the lead up the final hill, he was setting a strong pace and I was sucking his wheel, thanks Chad! With a few hundred meters to go riders started coming up on both sides. I was able to jump behind Paul from Recycled Cycles and actually catch my breath a little. Somewhere inside 200M a couple guys launched hard up the side, I was slow to react but I slid left and hammered it. I was able to get by Paul and a couple others but I ran out of road before I could run down the two guys who broke early. I rolled in 3rd behind these guys finishing 6th overall. All things considered I'm pretty happy with 6th. Last week at Vance Creek I finished 4 seconds off the winner but rolled in 26th and was very disappointed. 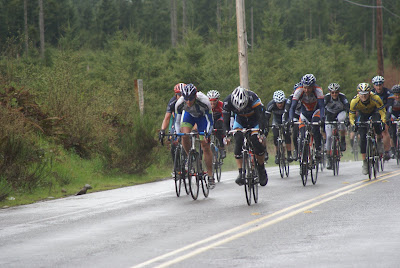